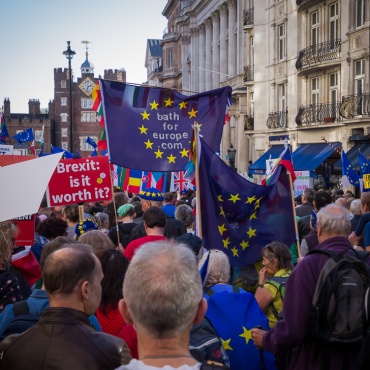 Delegation of Bath for Europe and Bristol for Europe supporters outside the European Parliament in Brussels. Photo © Clive Dellard.

One of 8 Bath for Europe coaches en route to London for the #PeoplesVoteMarch. Photo © Clive Dellard.

Bath for Europe is a non-party-political group of volunteers campaigning for the UK to remain at the heart of the European Union. We are one of the most active local UK campaign organisations, affiliated with our national support organisation Britain for Europe.

We are a grassroots group of ordinary people organising ourselves to achieve extraordinary things together. We donate our spare time, talents, knowledge, experience, ideas and resources. Some of our achievements to date include:

Over the last two years, we have organised:

If you have time and energy to spare we want to hear from you. Whether you have new ideas or skills you can offer, or you would simply like to help on our information stall or join our letter writing group, please contact us using the contact form https://bathforeurope.com/contact/ and tell us how you would like to help.

And don’t forget to register on the Join Us page to receive our newsletters and keep in touch with the campaign.

Bath for Europe: Beliefs and Aims

Bath and NE Somerset is a diverse, inclusive and welcoming part of the country, which owes much of its prosperity to our membership of the EU.

Parliament has voted to invoke Article 50 of the Lisbon Treaty, confirming the UK’s decision to leave the EU and beginning the process of withdrawal. The government hopes this process will take two years. Some critics argue it could take much longer.

Other political processes may determine the eventual settlement.

Whatever the future holds, Bath for Europe is clear. We will continue to campaign to stay in the EU.

Bath for Europe believes that