Following Prime Minister Boris Johnson’s decision last week to suspend Parliament to force through a No Deal Brexit, there have been widespread protests throughout the country as people have expressed shock and anger, deeming his move to be a ‘coup.’ Reports of between 50,000 to 100,000 gathered in London at the weekend and on Sunday, September 1st, a sizeable rally took place in central Bath.

Bath for Europe’s peaceful demonstration attracted about a thousand protesters, according to an estimate from former HTV West presenter Richard Wyatt. Bath MP Wera Hobhouse, with the Union Jack draped over her shoulders, addressed the crowd, initially in Bath Abbey Churchyard. She welcomed everyone and said she understood and shared their outrage. 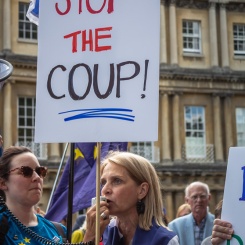 Creativity on display at the #StopTheCoup rally. Photo © Clive Dellard.

An imaginative placard at the #StopTheCoup rally. Photo © Clive Dellard.

“This goes far beyond Brexit. I fight for Parliament to continue its right to be sovereign.” Wera added that  she would be returning to Parliament on Tuesday 3rd September and hoped that legislation to stop the government pushing through a No Deal Brexit would pass. “It’s truly scary what the government is doing to fair process and I don’t think the Conservatives will recover from this act of vandalism.”

Blowing whistles, waving placards and chanting: “Defend our democracy. Stop the coup,” the protesters marched through the city, ending up at the Circus where they unrolled a ‘Remain Chain’ – a banner listing some of the benefits of being in the EU such as frictionless trade, the preservation of the Good Friday Agreement and more positive action on climate change.

Under the 200-year old plane tree in the central grassy area of the Circus, Wera spoke again and encouraged people to write to their MPs, post comments and letters in national and local papers to express their opinion about what the government is trying to do. She urged Bath residents to join Bath for Europe’s Stop the Coup protests taking place daily outside the Guildhall and, above all, “Book a coach ticket to join the People’s Vote march in London on October 19th. People power works. I haven’t given up hope we can stop this mess. So you must not give up hope either.”

Special thanks to our event organisers and everyone who took part. Bath for Europe are very grateful to our local police for their positive support.