On consecutive evenings recently, I attended fascinating talks by Jason Hunter, Stuart Brown and Graham Hughes on Brexit and the implications of leaving the EU with no deal. The talks included vivid descriptions of the chaotic and destructive consequences of a no deal situation in many sectors. It was clear that they see a no deal outcome as likely. 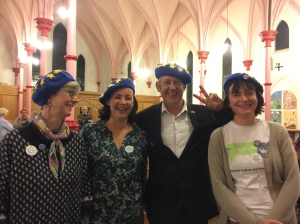 But how likely is a no deal scenario in late October or November? ‘Chequers is dead’ was Jason’s response to questions on the possibility of some compromise deal being reached in the next few weeks. The positive side of this for us Remainers is that no deal surely increases the chances of getting a People’s Vote with the choice between Remain and a no deal Brexit.

However, his level of certainty of a no deal outcome surprised me. The whole Brexit thing is hugely complex and chaotic, and no one can say with any degree of certainty what will happen. For what it’s worth, I think the chances of a withdrawal agreement in the next couple of months are higher than Jason and his fellow speakers seemed to suggest.

There have been indications that Theresa May is willing to make significant compromise on Chequers to reach a deal. We have to remember that most of ‘Chequers’ (that is, the July 2018 White Paper ‘The future relationship between the UK and the EU’ that followed from the cabinet agreement at Chequers) as the title indicates, covers the future relationship, which doesn’t have to be agreed in detail in the withdrawal deal. The sting of course is that the Irish border, which has to be agreed in the withdrawal deal, is inextricably linked with the future arrangements, particularly the customs union and single market. A compromise might entail moving towards a softer Brexit, such as staying in or close to the customs union and single market for an extended, possibly open-ended, interim period until some magical solution to the Irish border problem is found. These possibilities are of course being kept tightly under wraps for fear of triggering further rebellion in the Conservative party and the DUP.

A brief perusal of national newspapers in the last couple of weeks (such as The Guardian, The Times, Financial Times, The Independent, and The New European) show there are many commentators who think it’s likely that a deal will be reached in late October or November. The main difficulty is finding a form of words on the Irish border to satisfy all parties.

Exactly what the compromise will be to reach a deal is the key unknown. It is very likely to include fudge – key elements of Britain’s future trading relationship with the EU (and many of the other things laid out in the White Paper) left vague and delayed.

This doesn’t mean the country can relax if such a deal is made. Jason and the other speakers made the important point that it will take far longer to negotiate a complex new trading arrangement than the year and a half afforded by the transition period within the withdrawal agreement. Even in normal times that would be difficult. But British politics is highly unlikely to settle down if Brexit happens next March. Theresa May will surely be challenged as leader of the Conservative party when there’ll be some big and very difficult decisions to take about Britain’s position in Europe and the world.

May’s current strategy could well yield a deal. The strategy appears to be to go right up to -and beyond – the wire keeping the hard Brexiters at bay while trying to find a compromise deal. (The ‘wire’ currently being the October 18-19 European Council meeting, though it could be put back to November). The idea is to leave the hard Brexiters as little time as possible to challenge her position and then reach some softer Brexit compromise deal with the EU.

She will then finally have to face the music in parliament. Getting parliamentary approval could prove as challenging as getting a deal with the EU. It will be make-your-mind-up time for many MPs, hard Brexiters and pro-EU Conservatives alike, and those in the other parties who are less than certain how they’ll vote. To get the deal through somehow May has to persuade almost all Conservative MPs, along with the DUP, to vote for it, or rely on the votes of a few pro-Brexit Labour MPs.

Remainers should not give up hope. While some hard Brexiters might hope for the deal to fail in parliament (and thus leave with no deal), there is scope in the voting provisions of the Withdrawal Act for pro-EU MPs to demand a referendum. So far, seven Conservative MPs have publicly called for a referendum and reports suggest up to around 30 may be willing to join their ranks if the withdrawal deal looks bad. Although the primary focus of the Labour and SNP leadership in parliament is on two other potential votes (Labour a general election and the SNP a second Scottish independence referendum), Labour has inched towards supporting an EU referendum (it is ‘not ruling one out’) and the SNP will surely support one given pro-EU sentiment in Scotland.