Pulse of Europe has become a monthly fixture in Bath, ever since Bath for Europe introduced the event to the city and the UK in March 2017. The latest Pulse on Sunday 7thOctober focused on ‘Deal or No Deal’ which was the topic of three soapbox speeches and a street theatre piece.

Gathering in Bath Abbey Churchyard, the group welcomed a colourful throng of passionate regulars and newcomers alike. In her short speech, Livy Leydenfrost considered the prospect of a Deal, which at the moment looks like a hybrid between Chequers and Canada +++.

With the Chequers deal, Livy Leydenfrost explained, we would lose power as we would have to follow EU rules without having a say and ‘it could harm our prosperity as it doesn’t cover our services industry.’ According to the Office for National Statistics 79% of our GDP comes from this sector.

Livy Leydenfrost looked at what a Brexit deal would look like. Photo © Clive Dellard. 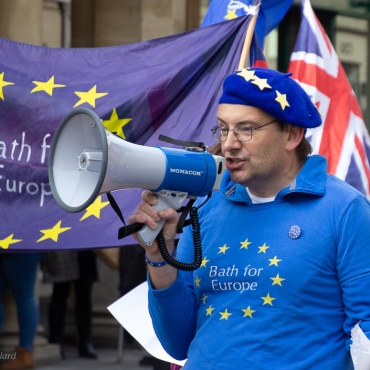 Even more worrying, Alan Champneys said, was the prospect of a No Deal which has been calculated to have ‘a greater detrimental effect on the UK economy than the 2008 banking crisis which led to the current era of austerity.’ Both agreed that neither ‘deal’ would guarantee peace in Northern Ireland which has been the main stumbling block in the Brexit talks so far.

The march ended up at Saw Close, opposite the Theatre Royal, where Noel Edmonds, snazzily dressed in a tropical shirt, was on hand to play a special Brexit version of ‘Deal or No Deal’. Contestant Theresa May was faced with a choice of six red boxes: one would hold the best Brexit outcome for the UK. At various intervals, a Monsieur Barnier called with a range of deals from ‘something like Norway’ to ‘something like Canada’ to which Theresa replied, ‘No Deal.’ Finally, all Theresa was left with were blue passports.

Bath for Europe has already filled six coaches to the People’s Vote March in London on Saturday 20thOctober and is taking bookings for places on a seventh coach. With support for a People’s Vote steadily growing, the March is expected to attract hundreds of thousands of peaceful protestors from across the UK and the Continent. Be sure to book your places now!

READ ALL ABOUT IT!