“Brexit: can it be stopped?” was the topic of discussion at a Bath for Europe event on Monday 5th August at Widcombe Social Club. Stephen Dorrell and Andrew Adonis, Chair and Vice-Chair respectively of the European Movement, addressed a packed audience who had gathered to hear their views on the newly formed Boris Johnson government and to understand how Brexit could best be stopped.

Stephen Dorrell, a former Conservative minister, talked about the origins of the European Movement, an organisation which had been set up with the support of Winston Churchill after the Second World War to promote the values of peace, prosperity, and international cooperation. He emphasised how nations working and trading together to create shared political interests is not conceding sovereignty but “recognising where the interests of this and future generations lie”. The European Movement now forms part of the on-going campaign to secure a People’s Vote on the Brexit deal. 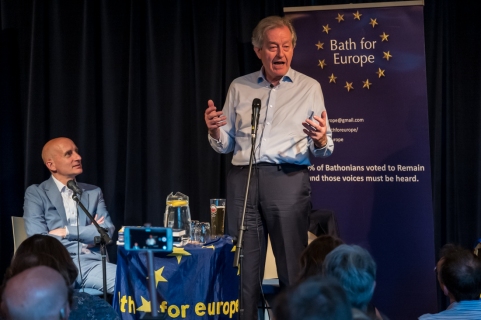 Mr Dorrell also addressed the authority of the new Boris Johnson government, which he argued was breaking pledges previously made for an easy withdrawal deal and additional government spending. “This is a government with no legitimate mandate, with policies in direct contradiction to what Boris Johnson said in his leadership campaign, to what Theresa May said in the general election campaign in 2017, and what the Leave campaign said in 2016,” he said.

Lord Adonis, a Labour politician who has served as a minister in both the Blair and Brown administrations, believed that Boris Johnson would be reluctant to call a People’s Vote given that there was a very strong prospect that Remain would win. Young voters who were unable to vote in 2016 would be mobilised, he argued, along with people in organisations whose jobs are being affected, such as Honda or Airbus.

In the event of a general election, he called for a “giant Remain alliance” to beat a likely pact between Johnson and Farage. Whilst conceding that would be a huge task, he emphasised that nonetheless “we cannot afford the narcissism of small differences when the future of our whole country and the future of our young people is at stake”. Such an alliance should include Remainers within the Conservative Party, he argued, along with the Labour Party, given that the majority of Labour MPs, members and voters were now in support of Remain.

The speakers also praised grassroots groups, like Bath for Europe, for their relentless campaigning, whether through street stalls, petitions and marches. They also urged the audience not to underestimate what had been achieved so far, saying that demonstrations such as the marches in London, one of which had attracted one million participants, had strengthened the resolve of many MPs to follow the courage of their convictions when voting against Brexit.

In addition to the grassroots initiatives, Mr Dorrell and Lord Adonis assured the audience that many politicians were working relentlessly behind the scenes at Westminster to use parliamentary procedure to avoid a No Deal scenario at the end of October.

Following a lively Q&A session, the two politicians lingered to chat with activists, many of whom were newly energised by the positive messages from the session.